Usually when we say that we have done or participated in something that was ‘pointless’, it is an expression of frustration–implying a failure of some kind or worse (in my world), a waste of time. Of course from the perspective of artistic practice, the pointless is a fruitful zone of experimentation. Perhaps for thought, and perception too. Certainly there are lots of things that seem like a good idea before you actually do them, and many ideas that don’t gain their full significance until a thing has been done.

A few weeks ago I helped a colleague to transplant some ferns and other plants from a soon-to-be-developed site in South Glasgow (the site of the old Graving Docks, whose survey I discussed in a previous post) to the North Kelvin Meadow–an abandoned playing field which has in the last thirty years evolved into a meadow ringed by a small wood of birch and other pioneer tree species. Though it is owned by the city, and is (unofficially, though not secretly) targeted for development, it is currently used by the community for a surprising variety of formal and informal activities–everything from dog walking, berry-picking, allottment gardening and composting, to children’s playgroups, outdoor education, film screenings, parades, storytelling and more. The developer that wants to buy and build on the land is the same one that is poised to pre-emptively raze the landscape of the Graving Docks in the next couple of months. So the transplanting of ferns from one site to another is not without significance. However, it is hard to say exactly what that significance is, or is meant to be: the timeline of impending events made it important that whatever was done, it be done sooner rather than later.

As I was re-planting some of the ferns (whose root systems were quite limited, given that many of the ferns had been growing on walls or in cracks in the paving), and simultaneously, discovering the quite limited potential of the soil in most areas of the meadow and its surrounding proto-woodland, I couldn’t help feeling that, despite how ‘at home’ many of the transplanted ferns appeared, they had relatively low chances of survival. In the past, I have had a gardener’s disdain for activist or artistic horticultural interventions that don’t take account of practical details such as the plant’s requirements, or the conditions at the site of planting. What’s the point, I’d say, if they don’t survive?

You could say that doing something is better than doing nothing, but in this case (and maybe also in the case of interventions I had previously disdained), it is more important that there is a possibility the doing can lead, eventually, to something else that is important–something beside the fact of survival and which can in turn give rise to something else again, and maybe even to something else beyond that. In other words, the doing is worth doing, as long as it invites further doing (and thinking!) and can be creatively extended–or in this case, tended–into the future.*

Which brings me to another thought I had as I was photographing the transplanted ferns, and noting how ‘natural’ they looked in their new surroundings, and also how, without the photographs (and what those photographs enable), their transplanting might go unnoticed. 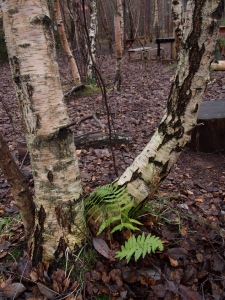 There seems in a way, something cheap or forced about this act of (potentially pointless) transplanting, once it is photographed. Were we doing it just to be able to say (and show) that we did? In some ways, the answer is yes–which is a bit humbling to realize.  But I think that may also be in part where the creative potential resides, and it is important not to be too precious about the purity of one’s intentions. As Jussi Parikka suggests in his writing about media ecologies, an act of preservation can be a creative act–but only if you let go of the idea of an ‘original’ nature. It has to be done for the sake of, and in response to, the specific creativity, or the affordances, of the beings and processes involved. What can ferns do? I’m not sure, but I think this is where the extension into the future comes in: what do the ferns require of us now that they are transplanted, introduced not only into a new (less biologically diverse) ecosystem, but into a new world of social possibilities? In planting these ferns in spaces that are well-used by the community, and especially by photographing (and now writing about) them, we were inserting them into a thoroughly socialized space. This is an act both arrogant and generous, since in positioning and then photographing them, we decided how they would best be appreciated, but in doing so, also imagined for them new possibilities for future relations.

Will people notice them? What will it take for them to speak in some way of their former home, and the practices of urban development that threaten both that landscape, and the one in which they now find themselves? What are the future acts (of writing and tending) that might make these effects possible?

* This notion of tending/extending draws on Brian Massumi’s take on the concept of expression in the work of Deleuze and Guattari, and is also inspired by horticulturally-inflected research-creation activities undertaken by members of the Sense Lab (at Concordia University in Montreal).

Dear #northkelvinmeadow, home of my Glasgow heart: I feel so lucky to have lived across the street for the last three years. Thank you for welcoming, inspiring, sustaining and sometimes frustrating me. I feel grateful to have been part of a place that is genuinely IN PROCESS. Whatever you do with your now open future, please stay at least a little bit wild. #urbancommons #urbanwilds